We picked Hawaii for our honeymoon destination because of a half-marathon. You may think I’m exaggerating, but I googled half-marathons in Hawaii as soon as the islands came out of my fiance’s mouth as an option. As luck would have it, the Old Koloa Sugar Mill Half-Marathon was set for November 11, a week after our wedding. We bought the plane tickets an hour later.

The Old Koloa Sugar Mill Half-Marathon is a small race on the garden island of Kauai, hosted by the local Ruritan club, and attended by high school XC-ers and runners who have known each other for a long time. Kevin and I kind of stuck out like a sore thumb.

The race course took you out towards the ocean, past the historic sugar mill, around the small town of Koloa then past the Poipu Bay Golf Course (home to the 1994-2006 PGA Grand Slam of Golf) uphill and back to the start line.

The start line is where I fell in love with my husband for the second time. He’s not a runner. Well, let me rephrase that. He used to be a runner. He and I have opposite stories – where I avoided the cross country coach at all cost in high school; he gladly signed up. Since then, he only really runs when I ask with a guilt-ridden “I don’t feel like running alone” thrown in there.

He said he would train. He asked when he should start his training schedule because I had two other races on the calendar before our big day. He took our dog Gunner out for two miles. And that’s where his training ended.

Back at the start line, I knew he wasn’t ready. I was fearful he’d pull a muscle or get hurt. The race director assembled the half-marathoners and told us to get ready. The sun hadn’t come up yet. It was already warming up.

We started off with a slow incline, up a closed highway. We could hear roosters crowing all around us. Did you know feral chickens and roosters run rampant on Kauai?

Two miles in, I was fading fast. I was hot. The past three weeks of wedding preparations and terrible eating caught up with me. I felt out of shape. I wanted to stop.

“Nuh-uh. You’re making me do this, so we’re doing it,” he said. He looked miserable.

I took my tank top off and ran in only a sports bra and shorts. Something I have never done. We headed towards the beach. With my spirits perking up, I played some music, and we chatted about everything around us (including the wild roadkill hog). Then the clouds cleared out and the sun burned down.

That’s the thing about Hawaii. The sun is hot. I know, I know, that’s like saying the ocean is big. But I’m telling you, I thought my skin was on fire.

At Mile 8, we climbed a brutal hill only to find a race volunteer at the top telling us to turn around. Kevin dashed off the sidewalk to find a tree to relieve himself while I recovered from a slap on the ass by a woman in a sequined skirt and glittery pigtails.

When I turned around to find him, I saw five or six chickens running away from a tree and heard Kevin yell. Apparently, he found his way into a rooster’s den.

Back on the course, we slowly but steadily made our way back to the start/finish line. Sometimes together, sometimes with a quarter of a mile in between us.

Two hours and thirty-seven minutes later, we crossed the finish line. A time that I usually would have been ashamed of, but at that moment I was just glad I wasn’t dead. I turned to look at Kevin, the love of my life, he kissed me and said, “I’m never doing that again.” 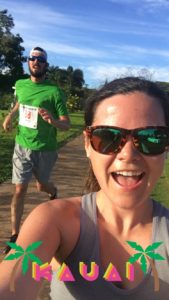